Skip to content
Editor Comment:  Rumblings from US cattle producers over USDA removing branding, their time tested tool to prevent cattle rustling, has reached the businss ears at WALL STREET JOURNAL.  This article articulates the problem, yet straddles the fence of detail and fact.  First, the “inexpensive ear tag” mentioned costs from $7 to $26 per critter and in Australian tests over 32% are lost or destroyed within two years.  As the USDA promotes expensive electronic ear tag devices, no removable ear tag in history has held up in a court of law for livestock title — yet hot iron brands are permanent and conclusive.  Take a lesson from history, not a temporary attachment. USDA plastic-removable animal ID is “flawed thought” and WSJ knows it!

The Bledsoe family and other ranchers across the West are resisting new government rules stating that branding will no longer be recognized as an official form of identification for interstate commerce. WSJ’s Stephanie Simon reports from Hugo, Colo.

HUGO, Colo.—In the chill of a damp spring morning, rancher Wil Bledsoe pressed two red-hot branding irons to the flank of a bellowing young calf. The smell of burning hair filled the barn.

When Mr. Bledsoe lifted the irons, the calf jumped up, wobbled a moment, then scampered back to his herd, a frying-pan logo seared into his shaggy hide.

Branding day has unfolded this way for generations on ranches all across the West. But ranchers from Colorado to Oregon, from Montana to Texas, worry that the tradition is under threat. The U.S. Department of Agriculture has announced plans to rewrite its regulations so that hot-iron brands will no longer be recognized as an official form of identification for cattle sold or shipped across state lines.

Instead, the USDA wants every cow to have a unique numerical ID, stamped on an inexpensive ear tag, to make it easier to track animals from ranch to feedlot to slaughterhouse.

Branding Day at the Bledsoe Ranch 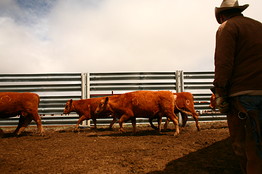 J.D. Schier watches cows walk into a different pen during a morning of branding on the Bledsoe ranch outside Hugo, Colo.

The proposed regulation won’t bar ranchers from branding their livestock. Individual states will be free to recognize brands as official ID if they so choose. And some ranchers who have tried the numerical IDs say they are no hassle and can actually be an asset, as they allow more detailed record-keeping on each individual cow or steer.

“It’s worked real well for us,” said Alex Johns, a resource director for the Seminole tribe of Florida, which has used bar-code ID tags for several years under a USDA pilot program. Mr. Johns said the tags helped the tribe sell their cattle at a premium price, as buyers had confidence the animals were tracked closely from birth and any health concerns noted and addressed. Keeping genetic records on heifers’ ID tags, he added, helped manage breeding programs to ensure birthing season brought healthy calves.

Nonetheless, ranchers across the West are up in arms.

The new rules, which the USDA will publish in draft form within weeks and which are scheduled to take effect in about a year, threaten “the United States cattle industry’s iconic, centuries-old, hot-iron brand,” a national coalition of cattle ranchers, known as R-Calf, wrote in a letter to the USDA. Rep. Dennis Rehberg, a Montana Republican and fifth-generation rancher, filed a similar protest.

Ranchers say they fear the withdrawal of federal support for branding might embolden animal-rights activists who call the practice barbaric. Some ranchers fear the new rules could even erode the legal standing of the brand as proof of ownership in cases of lost or stolen cattle.

The USDA says it never set out to undermine the traditional brand. Officials say the ID system will let them respond quickly if a diseased animal shows up in the meat production cycle, allowing them to track down other animals that a sick steer came into contact with.

Such track-backs have proved difficult for the USDA in the past. In 2003, 2005 and 2006, animals infected with mad-cow disease surfaced in the U.S. In each case, investigators had limited success identifying or locating livestock that might have been exposed to the sick cattle.

But branding advocates say none of the three animals was marked after birth with a registered brand from a U.S. ranch. One had been imported from Canada, one had no identification at all, and the third was traced to a Texas ranch that “kept very few herd records,” a USDA report on the case said.

Bill Bullard, chief executive officer of R-Calf, said tracing the animals would have been far easier had they been marked with an indelible brand, which, unlike an ear tag, cannot fall off or be cut out. Insisting that every one of the nation’s 93 million cattle has its own ID is “unnecessary, overly burdensome regulatory overreach,” he said.

Branding, brought to the New World in the 1500s by Spanish explorer Hernando Cortez, is today common across states like New Mexico, Texas and Wyoming. The marks can be seen from a distance and help ranchers settle ownership disputes when cattle trample fences and mix with a neighbor’s herd. Many states keep a registry of brands, so there won’t be two ranchers using the same Lazy J or Triple Dot. State brand inspectors say the practice also deters rustling, as thieves can’t remove the identifying mark.

And on many ranches, branding day is a communal affair. “The cultural tradition can’t be overemphasized,” said Taylor Haynes, a fourth-generation rancher outside Cheyenne, Wyo.

On the Bledsoe ranch in Eastern Colorado, family members spent a morning castrating, vaccinating and branding calves in practiced motions that took just 60 to 90 seconds an animal.

“When government steps in, they like to make things more complex,” Mr. Bledsoe said. “Branding’s the simplest, most efficient way to do it. Why change?”

Write to Stephanie Simon at stephanie.simon@wsj.com