Note: Facts, the application for the grant money to operate the program requires that Wisconsin abide by the terms set forth under the Federal Register. In which the participation must be voluntary and a producer can op-out. The state has breached their contract and are subject to Federal Administrative Relief which may result in repayment of all grant moneys. The USDA also failed to provide warning to the state that it may be sued, under requirements of Article 1 Sec.8 Clause 1 regarding grants under the authority of the General Welfare Clause. See annotated Supreme Court rulings for details. 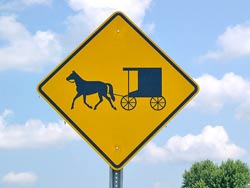 A decision has finally been made in the highly anticipated case in which the State of Wisconsin was trying to sue an Amish man for not following Wisconsin’s Livestock Premise Registration law. On Tuesday, Clark County Circuit Court Judge Jon Counsell ruled that Emanuel Miller Jr. of Loyal, Wisconsin does have a ‘religious right’ to be exempt from the law, which requires anyone who keeps, houses, or co-mingles livestock to register their premises with the state.

It was noted during court proceedings that the Amish do provide their names and addresses when they buy and sell livestock, and the judge said that doing so should be enough for the state to track down an animal in the event of a disease.

Prosecutors also cited a recent pseudorabies case in Clark County as an example of why the premises law is needed. But Judge Counsell said the state failed to show why alternatives, that would not affect Miller’s religious freedom, would not be just as effective.

The Amish believe the requirement infringes on their religious believes because it could eventually result in the tagging of all animals, or the ‘Mark of the Beast.’ But prosecutors felt with mandatory premise ID, the process of tracking down potentially at-risk farms would be much easier if there were an animal disease. The issue of “government ease” fell short in court to the issue of “religious rights.”

Meanwhile, Paul McGraw, the assistant state veterinarian with the Wisconsin Department of Agriculture’s animal health division says he expects the state to appeal the ruling. A case of this nature regarding a state case, is normally a wearing down of the accused, which judges also tire of.

The NAIS, requiring premises registration, was a program instigated by the USDA. Every state was offered “grant” funds as an incentive to enforce a full mandatory NAIS with arrests and fines for noncompliance. The Wisconsin Department of Agriculture, Trade and Consumer Protection has received over twelve million dollars to tighten the screws on all Wisconsin livestock producers. Their enforcements are the most ruthless of any state with many other pending cases. Their grant moneys are also the largest considering the number of livestock producers in the state.

Wisconsin has been used by USDA as an example of strict enforcements for the nation. Additionally increasing the weakened position of Wisconsin, national resistance to NAIS caused Sec. Vilsack on Feb. 5, to announce the NAIS program was discontinued. Without the backing of federal policy, judicial decisions by Wisconsin are predicted to be very problematic for the state. The Miller case is the first court decision since USDA withdrew the program.

On Feb 5 Vilsack stated that one of the reasons for terminating the NAIS program was that, “USDA had gotten a failing grade on NAIS” and that, “Terminating the program would help overcome some of the mistrust caused by NAIS.” It appears Dr. McGraw still has not arrived to where Sec. Vilsack is, serious work on the Wisconsin “mistrust” issue.

The case at one time was referred to as the state’s first such NAIS prosecution, until a Polk County judge ruled in October that Patrick Monchilovich of Cumberland violated the four-year-old rule after he refused to register his premises. He was ordered to pay a civil forfeiture and court costs. (This was before the USDA Feb. 5 announcement.)

McGraw and Wisconsin have been tossed under the bus by USDA and now Clark County Circuit Court Judge Jon Counsell just tossed them under a convoy of galloping Amish steel-wheeled buggies.