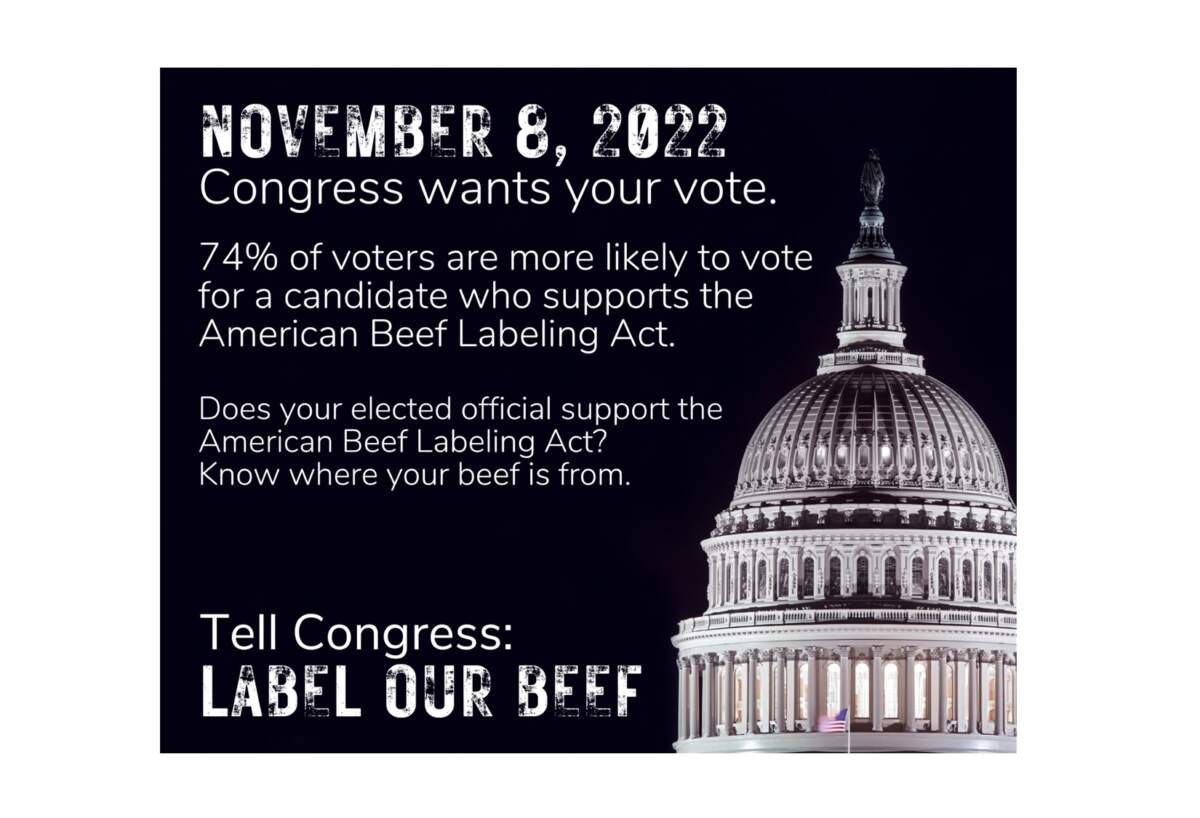 Background: R-CALF USA and you are credited with the introduction of the mandatory country of origin labeling (MCOOL) for beef proposed law that is now in Congress, Senate bill S.2716 and House bill H.R.7291, known as the American Beef Labeling Act. The next step is to get your senators and representative to cosponsor.

Congress will resume session after midterm elections, Tuesday, Nov. 8, 2022. We want MCOOL to be at the top of Congress’ priority list when session resumes, and these midterm elections empower you with the opportunity to hold your elected officials accountable.

The seats of all 435 representatives are up for election; and as of today, the American Beef Labeling Act has only three House cosponsors: Reps. Gooden (R-Texas), Khanna (D-Calif.) and Griffith (R-Va.).

Based on the principle that past behavior is the best predictor of future behavior, representatives who voted “NAY” against repealing MCOOL in 2015 may cosponsor the American Beef Labeling Act to reinstate MCOOL. However, those who voted “YEA” to repeal MCOOL in 2015 may still be against today’s American Beef Labeling Act. You should find out before the election! Click here to view the voting record of the 2015 COOL repeal bill in the House of Representatives.

There was no direct vote to repeal MCOOL in the Senate in 2015; however, you can click here to view the list of Senate seats up for reelection in 2022.

Here’s How You Can Help:

3.      Email both of your senators and representative at www.LabelOurBeef.com by clicking on the “MCOOL Campaign” button, complete the form, click “Next” and then “Submit.”

5.      In-person visits have the most impact, if you can, schedule a meeting with your incumbent’s office nearest to you.

When calling ask if they have seen the recent Morning Consult poll and share with them:

If they have not seen the recent Morning Consult poll, ask for an email address to send it to and follow through. Good luck and thank you for your continued support.

There’s only one way to win – Never Give Up!