Scenes of brandings are one of the most iconic and enduring images of the ranching lifestyle. For centuries, brands have played a vital role in conveying title of ownership. Officials say this ancient method of identification is still one of the best.

But questions are occasionally raised. How are hot iron brands perceived by consumers who have increasingly heightened concerns about animal welfare and how much does it cost the industry in terms of discarded hides?

The Colorado Cattlemen’s Association discussed the issue during a committee meeting at the 143rd convention this week, where animal welfare and animal health topics held key positions on the agenda.

Rick Wahlert, the Colorado brand commissioner, said he has fielded several calls on branding in the last few months. In addition, at least one of the big packers had issued a letter discouraging branding or at least urging cattlemen to leave the mid-section of the hide brand-free.
“I don’t know if it’s a push, but they’re looking at it again,” he told a meeting of the brand and theft committee.

Virginia Patton of Canon City, the CCA member who chaired the committee, said the association wanted to bring the issue to the attention to members and begin a discussion. “It’s not something we’re going to solve today,” she said.

The estimated value of an unbranded hide is believed to be roughly $5 a head. Gary Shoun, Colorado’s long-time former chief brand inspector, said packers launched a similar push for unbranded hides back in 1994 but premiums never materialized.

“I’ve heard that as long as I’ve been in the cattle business,” added John Stulp of Lamar, the current Colorado Commissioner of Agriculture.
Colorado is the only brand state that gives ranchers the freedom to place the brand wherever they want on the animal. Branding at the hip is typically recommended. Patton said on her ranch they moved the brand away from the middle of the hide but never recovered a premium for doing it.

Wahlert pointed out that a producer who left cattle unbranded and lost just two of them to theft would be out $1,000, and questioned whether even $5 a head was worth it.

“If you don’t brand, it sure makes it hard for us,” he said to producers.

The committee also raised the issue of animal welfare perceptions.

Wahlert said cattle have thick hides and few nerve endings, minimizing the pain involved. A suggestion was made to the committee to document those findings and put them into some kind of scientific paper. “It can’t hurt to get ahead of the horse,” Wahlert nodded in response, referring to potential complaints from animal welfare advocates.

Alternative forms of identification were also debated. Wahlert said there was nowhere to apply electronic chips where they weren’t at risk of migrating in the body. A bolus was a safer option, he added, but at a cost of $10 an animal was not financially feasible.

While freeze branding is becoming more popular, Commissioner Stulp and State Veterinarian Keith Roehr said it is more difficult to apply freeze brands successfully and they work better on horses than cattle.

Colorado State University animal handling expert Temple Grandin, a featured speaker at the convention and recipient of CCA’s Honorary Life Member award, said branding was a low priority when it came to animal welfare concerns, reeling off a laundry list of other items cattle producers need to work on first.

“Heat stress and fatalities in feedyards is higher on my list than branding,” she said in an interview. “Branding is a lot more defensible than whacking big horns off of adult cattle, or taking half of the ear off for identification purposes, or waddling them. Castration and dehorning are more on the radar than branding is.”

That’s consistent with the views of a group called the National Association of Farm Animal Care, which endorses branding as a searing process that never draws blood, is self-sealing and creates a permanent ID in seconds that requires no future use of medication.

No other form of animal identification has ever held up in court for a conviction of theft, the group added. Last year state brand inspection programs visually inspected and documented 27 million cattle.

To defend branding and other essential management practices, Grandin said ranchers need to do a better job of explaining what they do on the farm and why they do it. In promoting the recent movie about her life, which aired on HBO television, she found that the public is curious to learn about day-to-day farm life.

“It wasn’t negative,” she said of the countless questions she received in places like New York City. “That’s what was interesting. They’re just curious.”

She mentioned a YouTube clip in which a young boy narrates a tour of his family’s feedlot as an example of positive public relations for the cattle industry.

“This industry is very isolated from the public, and when we’re attacked, we get the siege mentality,” she said. “But we need to engage with the public, not PR people talking, but the regular ranchers.”

State Veterinarian Keith Roehr credits Colorado as one of the first states to adopt animal care standards. He said brands remain an important tool used in cultures all over the world and that Colorado would most likely remain a brand state for many years to come.

“As a bridge to a new animal disease traceability framework, the brand program is more important now that it’s ever been,” he said. “It positions us to do what needs to be done. Brand states like Colorado have been recognized as much more prepared to move into the future. The brand commission is not required to collect individual animal identification now, but they are aware that might happen in the future, and their role could become even more important.” 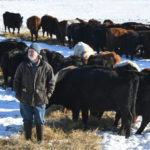 Cowboy Regulators Need to be Lassoed